Why America’s Wealthiest Investors are Turning to Farmland

Commercial real estate, once considered an “alternative” asset class, has become more mainstream as investors look for ways to diversify away from more traditional stocks, bonds and equities. However, there are certain segments of the commercial real estate industry that remain niche sectors – sectors that few individual investors know much about and even fewer have directly invested in.

Chief among those niche CRE sectors is U.S. farmland.

Farmland investing has historically been difficult. Most of the nation’s farmland has been, and continues to be, owned by the farm operators who occupy the land.

In recent years, large institutional investors have realized that farmland’s highly fragmented ownership pattern makes it rife with opportunity. Today, billionaire investors are pumping money into the sector as they race to aggregate enough land to scale meaningful farmland portfolios.

The Billionaire Investors in U.S. Farmland

Bill Gates has started to make headlines for his once under-the-radar investments in U.S. farmland. But the sheer volume of his investments can no longer be ignored: over the past decade, Gates has accumulated more than 269,000 acres of farmland across 18 U.S. states. Today, Gates is the largest farmland investor in America.

American billionaire John Malone owns a staggering 2.2 million acres of land across the U.S. Jeff Bezos reportedly owns another 420,000 acres of land. The lion’s share of this land consists of forests, ranches and farmland.

Yet the 100 wealthiest Americans own just 1.86% of all of the land available in the U.S. There is still significant land to be had – most of which is owned by small, independent farmland operators.

Investment in farmland really took off in the 2000s with the growing awareness that the global population is rapidly expanding, with standards of living correspondingly on the rise. This has drawn more attention from large public pension plans. For example, in 2003, the California Public Employees Retirement System (CalPERS) entered into a JV with Premier Pacific Vineyards of Napa to convert Oregon pastures, fields and orchards into more lucrative, premium vineyards.

Meanwhile, sovereign wealth funds and governments have entered the fray, often as a means of securing food supplies for their rapidly growing populations. In 2008, China announced a $5 billion plan to invest in international farmland, as China has an estimated 20% of the world’s population but only 7% of the world’s arable land.

Today, farmland is a $10 trillion industry globally ($3 trillion in the U.S. alone). Despite soaring institutional investment in U.S. farmland, their investment to date represents only the tip of the iceberg. There is still tremendous opportunity to be had among those willing to learn the intricacies of an otherwise niche sector.

There are many reasons for America’s wealthiest investors to pour capital into farmland. Unlike other commodities, land is a scarce resource. As the world develops and population expands, there will be competing pressure for the farmland that remains today. Moreover, the crops that can be grown on farmland are a commodity – one whose value does not ebb and flow with any strong correlation to the stock market. This makes farmland, and the crops grown thereon, a great hedge for those looking to diversify away from traditional stocks, bonds and equities.

These are among the top reasons why people are investing in U.S. farmland. We elaborate in greater detail below.

One of the reasons farmland is so attractive is due to its strong underlying fundamentals. Today’s global population is roughly 6 billion people, a number expected to increase to 9 billion by 2050. These people will all need to eat, therefore creating a heightened demand for farmland.

In addition to sheer population growth, both the incomes and diets of that growing population are changing in ways that will create additional demand for farmland. The per capita income in places like India and China, for example, is rising. As incomes rise, more people are expected to add meat to their diets. Correspondingly, more grain will be needed to feed livestock.

Globally, the per capita caloric intake is expected to increase from 2,772 daily per capita today to over 3,000 daily per capita in 2050, according to the UN’s Food and Agricultural Organization. The demand for increased quantity (and quality) directly coincides with a growing middle class worldwide – a fact not lost on savvy farmland investors.

Demand for farmland may be increasing, but unlike commodities, land is a finite resource. Arable land, specifically, is even more limited. By some estimates, only 7 percent of the Earth’s land is suitable for cultivation, and most of the world’s arable land is already in crop production.

For context: in 1960, there was an estimated 1.1 acres of arable farmland per capita. By 2000, this had fallen to 0.6 acres per capita. With a dramatic increase in the global population forthcoming, the ratio of available, arable farmland will become even scarcer. Arable land is only expected to increase by 4 percent between now and 2050, well below what’s needed to keep pace with demand. Forbes reports that food production will need to increase by 70 percent or more to meet projected global demand.

“Land is scarce and will become scarcer as the world has to double food output to satisfy increased demand by 2050,” says Joachim von Braun, director general at the International Food Policy Research Institute. “With limited land and water resources, this will automatically lead to increased valuations of productive land.”

U.S. farmland is also attractive for investors seeking portfolio diversity. Those who have historically invested in stocks, bonds and other equities will find that farmland has little correlation with these asset classes. This is because the value of farmland is dependent on two factors, and generally two factors only: (1) the underlying value of the land itself, and (2) the value of the crops grown thereon.

Historically, land values tend to remain relatively stable, appreciating slowly with time. There has been no 10-year period where cropland was worth less at the end than it was at the beginning. In fact, since 2000, the NCREIF Farmland Income Index, which tracks the value of U.S. farmland, has more than tripled. This stability is attractive to fund managers looking for a safe harbor from more volatile asset classes.

For example, during the economic downturn between 2010 and 2014, cropland dramatically increased in value, as shown below. 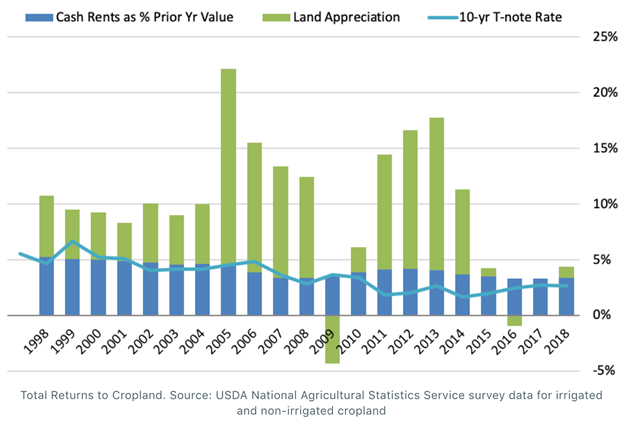 Crop values can fluctuate more dramatically, but these fluctuations generally do not correspond to fluctuations in the stock market.

Investors looking to hedge against changes in crop prices may further diversify by geography or farmland type (e.g., row crops vs. permanent crops, or investments in farm-related industries such as water treatment or grain storage).

Farmland investors will find that this asset class also provides strong, low volatility returns. Based on data from the National Council of Real Estate Investment Fiduciaries (NCREIF) Farmland Index, farmland has averaged 11.01 percent returns between 1992 and 2020. These returns were considered low-volatile, never ranging more than 6.9 percent. Only U.S. government bonds had lower volatility (4.55 percent) during this same period. Compare this to U.S. equities and US REITs, where volatility in returns was 17.5 percent and 18.31 percent, respectively.

Returns are especially strong when benchmarked against other investment vehicles.

Since the early 2000s, total returns on U.S. cropland have exceeded that of both the S&P 500 and 7-10 Year Corporate Bonds, as shown below: 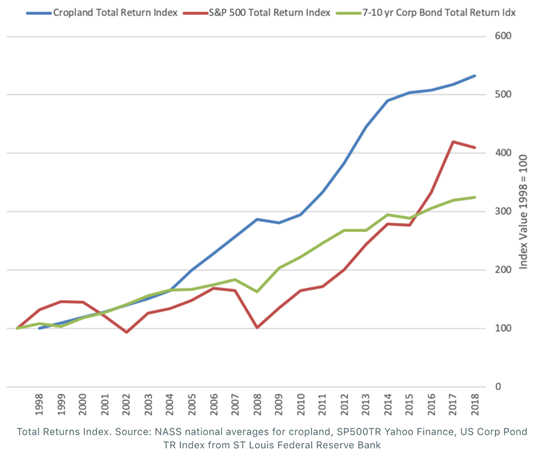 This delta has the potential to grow further. Technological advancements are expected to help farms improve yields and reduce operational costs. When farm operators generate more income, this improves the value of the underlying farmland. Rising farm income also generates higher lease revenue. In both cases, this serves to boost returns for farmland investors.

U.S. farmland is also considered recession resilient. This is because farmland values and income are tied to food demand. Given the inelastic nature of food demand (i.e. people’s need to eat), farmland values are not tied to the economic cycle as are other commodities. As such, farmland provides investors with a strong income yield relative to fixed-income alternatives globally.

And as noted above, farmland has low volatility compared to other financial assets like equities.

For example, when the equities markets crashed during the Great Recession, farm operations increased in value by more than 8 percent.

A Good Hedge Against Inflation

As far as investments go, farmland is considered one of the strongest options for those looking to hedge against inflation. Lord Jacob Rothschild, scion of the world-famous European banking dynasty, has long touted that owning a hard asset like land is a good hedge in an inflationary environment. After all, people always need to eat. It’s no wonder, then, that Rothschild and other billionaire investors are drawn to U.S. farmland.

Consider this: food is the third-largest category used to calculate the Consumer Price Index, or CPI, which is used to benchmark the rate of inflation. Farmland has a 70 percent correlation with the CPI and nearly an 80 percent correlation with the Producer Price Index, which tracks changes in sales prices. Given that food comprises 10 percent of the average American’s household budget, when commodity prices rise, so do farmland values. In other words, rising inflation bodes well for farmland investments.

Similarly, timber and other agricultural assets, which are known to produce strong perennial income streams, have a low correlation with interest rates. Therefore, investors who want to hedge against inflation can do so by investing in farmland given its long-term stability.

Farm operators are keenly aware of how climate change can impact the world’s food supply: from wildfires to droughts, the increased frequency of unprecedented storms poses a tremendous risk to cropland all around the globe. However, although climate change can be seen as a threat to farmland, farmland can also help to mitigate environmental impacts caused by global warming.

For example, there are growing concerns over America’s dependency on fossil fuels. In turn, there is mounting pressure for large institutional investors and companies to divest from fossil fuel and instead, invest in renewable energy.

Meanwhile, impact investors are funding advancements in precision agriculture and regenerative farming in order to support more efficient farmland operations – something that will be needed to create a healthier, more sustainable climate.

Is Farmland a Good Investment?

Anyone who is interested in adding a low-risk, stable yet lucrative asset to their portfolio will certainly want to consider investing in farmland. Farmland has proven to be a good investment regardless of where we are in any economic cycle: farmland performs well during economic recessions as well as in inflationary environments, making it attractive to investors looking to diversify away from more volatile stocks, bonds and equities.

Farmland held its value and even outperformed other assets amid other pandemic-induced volatility. Today, the outlook for farmland remains strong.

According to a recent survey, buyer demand is drastically outpacing seller supply. In 2021, less than 10 percent of farmland owners were in the market to sell. Meanwhile, nearly 60 percent of owners were looking to acquire additional farmland assets.

Not a single survey respondent believed cash rent prices would fall in 2022, while 28 percent expected rent to increase by 10 percent or more.

By some estimates, only about 5 percent of U.S. farmland is owned by professional investors. In a market worth several trillions of dollars, this represents a tremendous opportunity for those looking to invest in farmland.

America’s billionaire investors shouldn’t be the only ones to reap the benefits of U.S. farmland. If you are an investor seeking both stable cash flow and steady, long-term appreciation, contact us today. Our team would be happy to discuss how our platform is making it easier than ever for retail investors to begin investing in farmland. 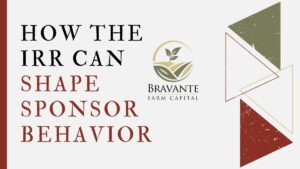 How the IRR Can Shape Sponsor Behavior 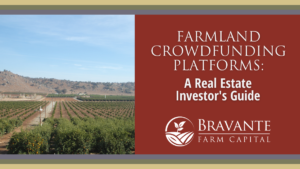 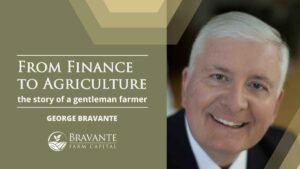 From Finance to Agriculture – The Story of a Gentleman Farmer