Why farmland fares well in times of economic uncertainty

Fears about the coronavirus pandemic have faded, but new sources of economic uncertainty have emerged. The steepest inflation in four decades has forced the Federal Reserve to raise interest rates aggressively, and the central bank’s fight against inflation has raised concerns about a recession for the U.S. economy.

All of that uncertainty is creating volatility in financial markets. But there is a place where investors can find stability. Farmland has consistently produced positive returns in both recessionary and inflationary periods. True to form, farmland values have performed well in the choppy markets of 2022.

The fundamentals of farmland

Farmland is a hard asset that historically has appreciated in value over time while simultaneously generating an attractive yield. By contrast, stocks are valued on their future cash flows and not typically on their underlying assets or book value. Bonds are valued on the ability of the indebted company or government to pay its future debt obligations.

Commercial real estate is similar to farmland in some ways, but the distinction is that vertical construction on the land means many of the assets depreciate over time, so there are constant expenses for renovation, remodeling and rebuilding. The final asset is cash, the safest but least attractive alternative. Today's returns on savings accounts are microscopically low, and inflation is working against savers.

As an asset class, farmland has historically performed well and with lower volatility than other commercial real estate asset classes. The Standard & Poor’s index of U.S. equities has provided attractive returns – more than 11% a year on average since 1990. Reflecting their volatility, stocks also turn in years of significant losses in volatility. Farmland, by contrast, produces returns similar to stocks but with much lower volatility of annual returns. Triple-A bonds are seen as a solid alternative, providing a low-risk return but when adjusting for risk, however, farmland historically has delivered stronger returns in comparison.

A shelter in the storm

With the Fed taking away the punch bowl and the U.S. economy teetering on the brink of recession in 2022, markets responded in kind. The S&P 500 fell more than 20% in the first half of 2022, and the total return index for corporate bonds was down 14%.

For investors, 2022 has been a challenging year, one that offers few places to hide. Google search volume on recession-related topics soared above all previous spikes in search interest about that term.

At the very least, it is clear the U.S. consumer has grown fretful and anxious. Consumer surveys show that concern is on par with past economic downturns. Sentiment around current conditions has reached a new decade low, on par with that of the 2008 financial crisis. The index of consumer sentiment fell 40% in the first half of the year.

As recession fears abound, farmland can provide a partial shield from uncertainty. On our farms we have multiple crops that reach maturity at different times of the year so, while crop revenues do not come through monthly, there are regular seasons during which revenues are generated and investors are paid. This contrasts with other commercial real estate where buildings generate income from rents.

These buildings require nearly constant maintenance and ongoing improvements to remain competitive, making older buildings less attractive over time. By contrast, farmland does not have this depreciation issue. The individual site’s soil quality can support its value, along with water availability through buying in The Oasis as we do, and the overall scarcity of land.

Agricultural real estate is attractive because of its very lack of volatility. Through the early 1990s recession, the dotcom boom and bust, the global financial crisis and the COVID pandemic, farmland has shown to be a fascinating store of value. Farmland is not a silver bullet, but it behaves distinctly from other asset classes.

Farmland returns have averaged 10.5% a year as far back as data is available. Today, inflation is the most compelling macroeconomic threat. The May consumer price index was up 8.6% year over year. In June, inflation accelerated to 9.1%.

True, input costs also have gone up also. Fertilizer, fuel, and other supplies have risen in price. However, despite higher production costs, we still expect to have attractive per acre margins for our crops because demand strengthens as consumers seek to save money by staying home, consuming more screen entertainment, and eating more.

But back to the underlying land prices: The key takeaway is that farmland values have shown a strong correlation to inflation dating back to 1969. This measure is focused on land values and excludes the income produced from the farm.

Our investors make money two ways from investing in farmland, both from the land itself appreciating in value over time, and also from the income produced on our ranches.

According to Statista data, through the end of year 2021, farmland values nationally have gone up at an average annual pace of 6.0% since 1970. 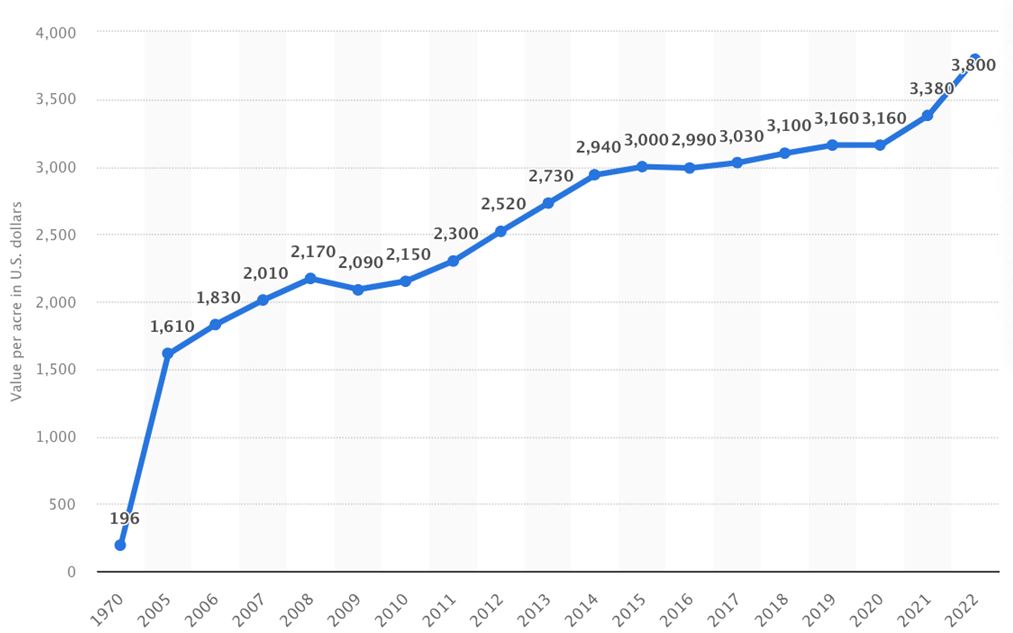 Take a step back and look at that capital appreciation for farmland over a longer-term horizon, and it appears that the appreciation may still be below trend. While farmland values and returns have been rising, they appear to be adjusting towards a trend.

Plus, these average increases in farmland values nationwide do not take into account the four macro-economic factors driving values higher (above average).

What is supporting the values in today's farmland economy and into the future? First is the simple story of supply and demand. On the supply side of the equation, the supply of arable acres, both in the U.S. and in many places abroad, is declining. A lot of those acres are being lost to urban development and in California particularly lost to drought – which is why we focus exclusively on The Oasis where water is abundant.

Ultimately, this disappearance of productive farmland really sets farmland apart from other asset classes. The supply of agricultural land is not only finite, it is actually shrinking, and not just in Cailfonria. Something like three acres of arable land go out of production every minute in the U.S.

On the demand side of the equation, consumption is increasing. A growing population means there are more and more mouths to feed. The emerging middle class in developing nations is an important part of this story.

The economic development of the 20th and 21st centuries has boosted incomes for hundreds of millions of individuals and families around the world. These increasing incomes have historically led to higher caloric demand per person, in part driven by more consumption of animal proteins. Diets higher in animal proteins in turn require larger amounts of grain, primarily corn and soybeans, per person, and also to a rise in demand for fruit, including the high profit crops we specialize in. So this slow and steady upward march of demand has been going on for more than 50 years and appears to be continuing.

Combine those two factors -- continued growth in overall population and the global middle class, and a dwindling amount of farmland – and the supply-and-demand equation clearly favors owners of farmland.

The macroeconomic conditions look bright for farmland as an asset over a long period of time. Global supply chain issues are grabbing headlines, but those issues tend to be transitory with respect to farmland values. More significant long-term drivers of demand include growing biofuel demand, new purchases from Asia and a rising global middle class and the associated shift in the global diet.

Robust demand for agricultural products has translated to an increase in net farm income. For 2022, net farm income overall is forecast to be 15% higher than the trailing 20-year average.

On the balance sheet, U.S. farmers have low levels of debt. The farmland sector has a debt-to-assets ratio of just 16% debt to assets and here at Bravante Farm Capital, we do not take on any more than 50% debt. By contrast, typical private equity real estate sponsors will take on as much debt as they can which, these days, often means 70-75% debt relative to asset value – some 40-50% more leverage than we do. In other words, farmland and farmers as a whole are under-levered relative to the larger economy. In an economic downturn, this lack of leverage can create a meaningful advantage.

A bright future for farmland valuations

Structurally, farm incomes are benefiting from economic forces. And if farms operate profitably, that boosts the value of the underlying land. What’s more, institutional investors finally are discovering farmland as an asset class, a shift that is likely to unlock even more value. The bottom line for investors is that farmlands has consistently produced positive returns, both in periods of recession and inflation. 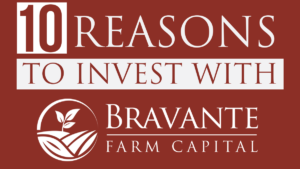 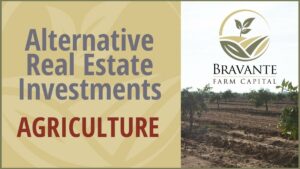